So I’d just gotten home from work, my fiance of 10

for a drink and a bite to eat, as well as swinging by one of my offsite warehouses. I really didn’t want to though, I just wanted to lay done after a full on day. I averaged 30 thousand steps a day at my job.

Today had been busier than usual and I was tired,

looking back I think it was my gut telling me to not go, but I knew she’d been looking forward to it, getting out of the house. So we geared up and

jumped on my Hyosung 650cc and off we went.

The warehouse was going to be the first stop. 15

minutes away, at the most, I slowed down as I approached the roundabout, a bus was going straight

through, across our path, I looked to my right,

there was nothing coming at all. Looked to my left

as I started opening up the throttle and leaning, as

we entered the roundabout, I saw the truck

approaching, and dismissed it as I went to open her

up further, I’ve got right of way, he’s not even at the

Halfway through, a split second in time, I see the

truck bearing down on us out of the corner of my eye,

I consider dropping our weight to my right, dropping

down a few gears and really opening that throttle up, redlining the girl in an attempt to get

away. Instantly I realise, there’s no getting away from

this. I sit upright, turning my body, putting my left

arm behind me in an attempt to shield my fiance. It

all seemed to happen so fast, yet I remember

first, which was flight, try get us out.

The second one, was fight, so I faced that truck and

tried to protect my fiance.

I stayed conscious the whole time. I was aware, as I

flew through the air, that my helmet came off. I was

swearing at the truck driver as I saw him through the

windscreen. Tucked my chin to my chest as I landed,

the back of my head scraped the road, I came to a stop under the front bumper of a car waiting to enter the roundabout. I was so angry, I called out to Brandi, my fiance, there was no

response. So, thinking she was dead, I tried to get

up. I remember screaming in agony, searing white pain exploded throughout my body. I fell back down, not that I’d gotten far off the ground. I elbowed the road in frustration. People tried to tell me she was

okay, I knew they were lying. Then they said she’s

alive, just unconscious. I stopped calling out then.

I then started to take my jacket off. The bystanders started saying don’t move, leave it on. I snapped

“I’m taking my fucking jacket off!” I was so angry.

As I struggled to get my jacket off, a guy helped me and my phone fell out. He said, is there anyone we can call. I was like, ahh.. my emergency contact o it was on the other side of the country. So I said, just

give it here. I unlocked my phone and called my

up with my cheek accidentally. So I text him where I was, in case he didn’t hear me.

The medic got there, looked at me texting. Who does

that right? Over 24 breaks and fractures. Bleeding on

the road from a snapped leg. Bleeding internally, a

trying to get it around the body, just filling up chest

cavity. Wait, can’t die yet, need to send a text to my

Just been hit by a truck while on my motorbike
Wait, can’t die yet, need to send a text to my boss.

Just been hit by a truck while on my motorbike

Kidding, he didn’t say that.

Paramedic took the phone off me. Then I told him, Mate. My chest is

burning up. There’s so much pressure.

As soon as I said that, they called for the helicopter.

I didn’t know with every heartbeat, my chest was

filling with blood. So, he attended to injuries that

were bleeding externally. Did all the other stuff.

Finally gave me pain meds. I’m like. Dude, seriously, how long is it going to take, I’m fucking dying here

(Not knowing I was) the last thing I remember, I was put in an ambulance, to take me down the road

to where the helicopter was waiting. Paramedic looked at me before shutting the door and asked.

“Have we got everything? Do you need anything?”
“Yeah, I need a fucking beer”
He did a double take.. Like. Wtf? And I was out.

So, I wake up, in this white room. So bright that I can’t

see where the walls meet each other, or meet the

ceiling. It’s bright, but it doesn’t hurt my eyes. I can’t

move, I remember everything from the accident, but

I’m feeling no pain. Hell, I can’t feel anything. I also

can’t move, I can look around, but that’s it. In the

clear as day I hear voices.

“Okay, this body is done. Grind it up and move the

I don’t remember what the response was, I just

remember trying to shout. NOOO. All I could think of

I am not leaving my daughter without a father.
Was the last thing I remember saying..
I woke up in hospital 5 days later with tubes down my

throat. In my neck. In my left side. I had a metal frame around my left leg, that had rods going through

my thigh muscle, into the bone, through my shin

bone and through my heel. My right leg was wrapped

from ankle to above my knee and I could see blood

seeping. My fiance came to visit me the next day,

after the tubes down my throat were removed. Being

intubated, That is not a pleasant experience.

My fiance wasn’t as badly injured, but bad enough.

She had dislocated her left hip, she’d almost lost her

left leg at the knee. She busted the little bones in her eardrum, and compound fracture in her hand.

I had two fractured vertebrae, shattered my scapula,

broke 6 ribs on the left, 4 ribs on the right, dislocated my left hip, as well as snapping the head

of that femur in half, the actual ball of the hip joint, in

half. I shattered my left knee cap. I broke both bones

in my left lower leg, just below the kneecap. I’d

broken both bones in my left leg, just above the ankle, that part of my leg was sticking out, bone

had busted through my muscle and skin. I broke my

lower right leg, both bones, just below the knee, and again, just above the ankle. I also snapped

the main tendon at the front of my right foot, we

didn’t find that out until a year had passed.

Think that was all my injuries. That was 20th October

And so began the long slow road to… where I am

today. Can’t say recovery as I’m waiting on my hip replacement, my hip is bone on bone, has been for

12 months, now the head of the femur is collapsing

in at the top and is fragmenting, there’s also signs of

necrosis. I actually went back to full time work in

that’s another story though, for another day.

Another story where I die, again.

I spent 3 and a half months in hospital, the first

month, maybe longer, was very tough. I couldn’t even

wipe myself. Whenever I needed to go to the bathroom, had to call nurse, then she had to call two

others. They had to roll me, and each time, the pain

was excruciating. I left hospital the week before

Christmas, in a wheelchair. I got rid of the wheelchair

in early April 2016. I decided, when I could walk from

my car (I was driving pretty much the day after I left hospital) into the grocery store, get

my basket of whatever I needed, walk back to the car,

then I didn’t need that fucking wheelchair anymore. I

left it in the back of the car for an entire week,

without using it once. Sent it back, two days before

flying to America, to rejoin my now pregnant fiance.

meeting everyone, in a damn wheelchair. I did get her

pregnant while still in a wheelchair though. Lol.

surgeon for a check up. While waiting for him, I saw

this guy walk out of an office, look at me, do a double

take, went back in to the office. Shortly after he came out and called me in. On entering his office,

he shook my hand and said,

“It’s really good to see you. We didn’t think you’d

I was like, oh. Okay. When the heart surgeon says

that, you know it was serious. I had shredded my

descending aorta. The largest artery in the body.

That injury alone, has a 2% survival rate. 80% of victims die at the scene, usually because the sheer trauma of impact to cause this injury, usually means the person is unconscious or in shock and unresponsive. There are no visible signs of this injury. A further 80% die on the operating table.

Told my housemate that, later that afternoon.

He says to me, “Well yeah, a doctor came out to see

me when I got to the hospital that evening. He told me you had died once on the operating table already,

they’d managed to bring you back but wanted to

know what to do if you went again. I said, umm, whatever you can? I don’t know, I’ve only known

I just stared at him. 5 months after the event, was

when I found out, not only that I’d died, that the

surgeons, experts in their field, didn’t think I’d make it. That was when the death experience I had came flooding back. I got goosebumps through my

entirebody right then. I told him what happened. He

just stared at me, beer halfway to his mouth.

“Get fucked. Are you serious?” was all he could say.

I’ve had 13 operations so far. Aside from my heart

stent, I have three screws in my left femur head, I

have two massive screws through my knee cap area,

I have two rods, one in each leg that run from knee to ankle. Two screws top and bottom of each one. Fixing them to the bone. One of the screws in my right leg, at the top has snapped apparently. I

left leg, to try help straighten my leg a bit.

Below are a couple of pics, nothing gruesome for

those with weak stomach,

Scene of the accident, if you zoom in, on the left, two guys holding up a trap, I’m behind the tarp. You can see the truck on the right.

3d image of shattered shoulder blade, a friend once

commented it was just an x-ray of ET. 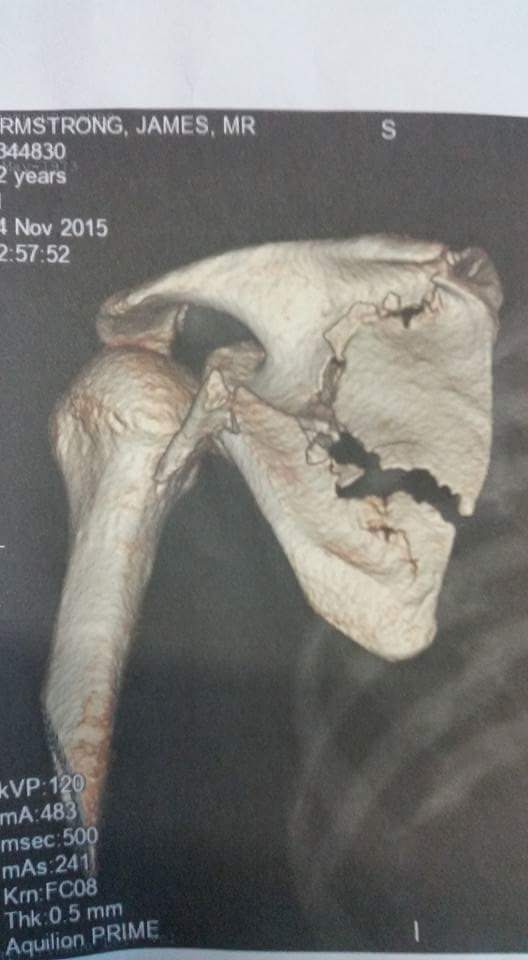 Stent, the Chinese finger trap looking thing that is

next to my spine. Repairing my shredded descending aorta. 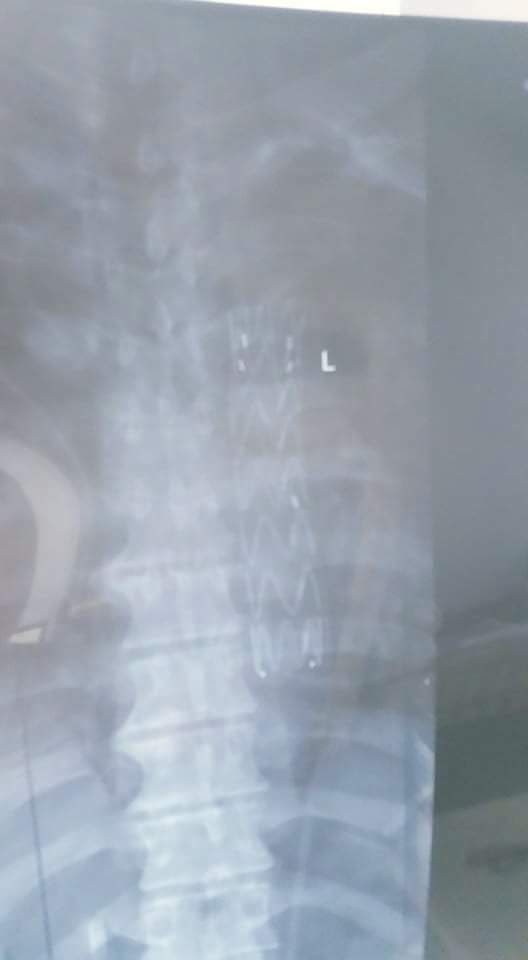 Tv News segment, presenter got my name wrong, but

they got it right later.